Ephesians 2: "No longer strangers and aliens"

Yesterday we continued our journey through Ephesians. I’m keen for us to hear the whole of this letter as we go through it, so we began with a reading of the whole of Ephesians 2, but these are really rich and dense passages, and so we focused in on a particular aspect of the chapter. The first half of the chapter speaks of us being made alive in Christ and saved by his grace, and that is wonderful stuff, but we jumped ahead to the second half of the passage, which speaks of reconciliation to God and unity in the church.

So first our reconciliation to God. We read in verse twelve that “you were separate from Christ, excluded from citizenship in Israel and foreigners to the covenants of the promise, without hope and without God in the world”. Separated. Excluded. Without hope. It all sounds rather grim. But fortunately that this isn’t the end of the story, because in the very next verse we are told that, “now in Christ Jesus, you who once were far away have been brought near”.

The context for this is that the people this letter was written to were Gentiles, and what is being said here is that they were completely outside of God’s people and promises, until Christ brought them in. I deliberately phrased it that way because that is what is being said, but I don’t think it is entirely true. There are hints littered throughout the Bible that suggest that it was always God’s plan to bring all people to him, prophecies about all worshipping on God’s holy mountain and stories of faith outside of the Jewish community, so I don’t think the Gentiles were ever so completely without God as the letter suggests.

But the point is that because of Christ, things have changed. The truth that God’s heart is for all people has been fully revealed, and any idea of separation or exclusion has gone. Or at least, that’s how it’s meant to be. This change is understood here in terms of reconciliation, powerful language which reminds us that this is not a change in legal or social or political status but an invitation into relationship. I wish I could unpack all that means, but the truth is that it will take a lifetime to learn even the smallest part of it, and relationship is a deeply personal thing, which we each need to discover for ourselves.

I may not be able to say everything, but that doesn’t mean I can’t say anything, and I do want to touch on the covenants of the promise that we were foreigners and are now heirs to. We thought a little about covenant at the very start of the year, and scripture contains hundreds of promises which God has made and only waits for us to take hold of. He promises to be with us, to strengthen us, to guide us, to heal us, to deliver us, to hear us, to provide for us, to love us.

This is just the beginning of what it means to be reconciled to God, and this reconciliation is a truth which must be celebrated, not accepted with a shrug or only dimly recalled. That’s really brought home by the Message translation of verse eleven, which begins “don’t take any of this for granted”. I think that is really important for us to hear, perhaps especially for those of us who have grown up in church and never felt a sense of being out and then in. We have all been reconciled to God because we are all able to live in relationship with him in a way that we wouldn’t without Christ, who made him known as he had not been known before, and we should rejoice in that.

Our reconciliation to God is foundational, and here it lays the groundwork for speaking about unity in the church. I said that relationship with God is deeply personal, but it is not individualistic, because it brings us into relationship with one another. If we’re all children of God, we’re all siblings. And so in verse fourteen we read that “[Christ] has made the two groups one and has destroyed the barrier, the dividing wall of hostility”.

The writer is speaking here of the hostility between the Gentiles and the Jews, and it has been suggested that the dividing wall he had in mind was the one which kept Gentiles to the outer courts of the Jewish Temple, and which they crossed upon penalty of death. But of course we have our own dividing walls. They may look a little different, but it is still the habit of man to put up barriers and it still the heart of Christ to tear them down. The dividing wall between the Jews and the Gentiles was physical and social and legal and religious. The dividing walls we put up can still be all of those things. 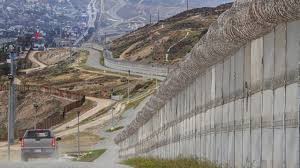 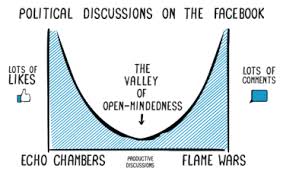 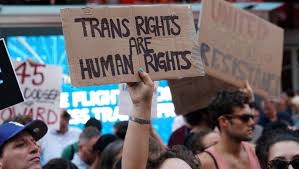 We put up physical walls to keep people out of sight or out of our way. I preached on this passage four years ago, and the example I used at this point was the US/Mexico border with its miles of fence, as seen in the top left picture above, which even then hundreds died trying to cross each year. How much more poignant that example seems now, with migrant children taken from their families and dying in detention, and the government having only just ended a shutdown brought about because the president is so desperate to see that barrier made even more solid.

We put up social barriers which keep us away from those we don’t like or find difficult. People talk a lot about the idea that social media has become an echo chamber, as imagined in graphic form in the top right picture. We friend and follow people who agree with us, and repeat our own beliefs back to us, so that people who disagree with us become entirely other, and we become even less able to hear let alone understand their point of view.

We invent legal hurdles which make life difficult or even dangerous for the other. The US Supreme Court have just upheld a ban on transgender people serving in the military, using thoroughly debunked claims to discriminate against serving and potential members of the forces. This is just one of a number of attempts to discriminate against transgender people, often using language which frames them as a threat when in truth they are one of the most at risk groups in the world, hence the need for protests such as that pictured in the bottom left picture.

And we make religious rules which demean or dismiss those who do not think or believe like us. The bottom right picture shows the gravestones of a Protestant man and his Catholic wife, who could not be buried in the same graveyard because their churches did not allow it. It is a striking image of the pain and separation that can be caused by the barriers we set up between one another, but also of hope that rules can be broken and walls reached over.

We have to take the will of God and the commitment we make to it in prayer seriously. And that means there must be a practical outworking of it in our lives. When we read that Christ destroys barriers, we too must set out and destroy barriers, speaking prophetically against anything that dehumanises or divides, and building relationships in every direction possible.

Our guest speaker from Inclusive Church talked two weeks ago about a woman who was afraid to go to the posh church because she thought she would be judged for not having enough to put into the collection plate, and another person who waited outside the door of a church until another person of colour arrived because they didn’t want to be the only one in the congregation who looked different. Those churches may have been the most welcoming places in the world, but those people didn’t know that because the churches hadn’t shouted it loud enough. That’s one of the reasons I keep pushing at inclusion, because we need to make sure our welcome starts outside of the building, that we are known in our community as a place that all can find sanctuary.

We also took on Ephesians 3 on Sunday, so watch out for another blog post coming very soon...

"The goodness of the Lord"

"A resurrection of our common life"